Hot off the press: My Attack the Block review

If you’re even the least bit interested/excited about Attack the Block, you’ve probably already read a gazillion reviews of it as the first press screening was quite some time ago now. I’m not going to get all emo again about how no one is inviting me to press previews of films, but I’ve just been to see the first showing of the film at the Liverpool Odeon, just so I can post a review of it before everyone is sick of hearing about the damn thing.

To give you a brief but extremely lazy sum up of the film, it’s like any alien invasion movie meets any gritty English movie about the hood, ya get me blud? Believe me though; it’s a lot better than that sounds. Its director comes in the form of Mr Joe Cornish, from The Adam and Joe show fame, which is responsible for moments like this; 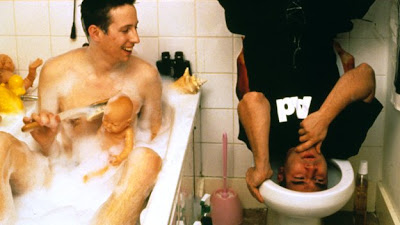 Joe is the one in the bath washing the toy baby. He decided a few years ago that he’d go off and follow a dream of his to write and direct a film, and Attack the Block is what he made.

Even though I hold a soft spot in my heart for them, films like Kidulthood have one fatal flaw, they never address that their main protagonists are complete tossers and still expect their audience to root for them. In a way, Attack the Block turns this on its head within the first scene, we are shown the main characters, 6 or so teenage boys, mug a completely innocent women. Therefore, the film sets itself a huge task for the rest of the its run time, as the audience needs to get on the gangs good side to make sure that we actually care about themwhen the aliens land and start to tear up everything.

This is a target that is most certainly met, not through cheesy montages or ‘we have to work as a team and be nice to others’ speeches, but through pretty harrowing action sequences and a really fun script which tries to make the guys as relatable as possible.

As I’m not from London, I hardly hear anybody use words such as ‘merk,’ ‘shank,’ and ‘blud’ all that often, unless they’re being ironic. Unfortunately Attack the Block used dialogue like this a bit too much, nearly to an extent where subtitles would have been helpful, this was something that was not really needed as after half an hour it got quite stale and it got in the way of some lines that would have been fairly LOL-worthy (I hate myself for using that phrase.)

A lot of credit should also go to whoever designed the aliens in the film, I was fairly worried that they’d just be a pastiche of famous creatures from older films, but they looked like nothing I’d seen before. Crawling on all four legs with a blacker than black coat of fur and sharp as nails teeth that light up in the dark, they made for some pretty scary villains, and they really helped make the climax of the film incredibly thrilling.

Hopefully I’ve got it through to you that I thought the film was a lot of fun, not the masterpiece that some people have made it out to be, but great fun all the same. At times I thought there were moments that could have been made a lot bigger, this is probably down to Cornish’s limited experience and small budget, and also, it really didn’t need the scene where they loosely tried to explain why the aliens were there, but yeah, awesome fun.

As it’s just May and we’ve already had two super fun British films, this and Submarine, I’m hoping that there’s still more in store for us throughout the year, but for now we should all be proud that these two pieces of work came from our little island.

Posted by Matthew Thompson at 08:53