The first of many Monsters Inc 2 posts

Hello, and welcome to Douche on Films first post based solely on all things Pixar. I’ve had to refrain so far, otherwise all my posts would be filled with incessant ramblings on how I think Pixar is the best thing to happen to film, EVAR!

Before I go any further, I just want to tell you all that Monsters Inc is my all time favourite film, a lot of people seem to scoff at me when I tell them this, because it isn’t Citizen Kane, it isn’t The Godfather, it isn’t some random obscure film that only a few people have ever seen. My favourite film is certainly Monsters Inc, and if you have a problem with that, you can go and suck a fuck.

When it was announced last year that my favourite film was going to get a sequel, my face probably looked a little like this; 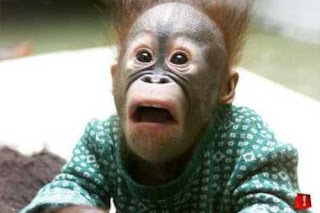 Although I have an amazing amount of faith in Pixar, I was very worried that they were going to arse it up and ruin the story of Michael "Mike" Wazowski & James "Sulley" Sullivan as we know it. As we can all agree, the first film has an amazing, heart wrenching ending and I didn’t want it to be changed in anyway. There was a rumour that in the sequel we were going to see Boo as a teenager, and I’m sorry, but that just sounded like the worst thing ever. Boo is the cutest, most loveable character that Pixar have ever produced and nothing sounds worse to me than seeing her as a spotty, bratty teenager, as that’s what all teenagers are like, right?

However, it was announced last week that the new film will actually be a prequel, entitled, Monsters University. So now we’ll never know what happened after Sulley opened Boo’s door again at the end of the first film, and we can still imagine what fun and frolics they got up to. This has made me a lot more optimistic, one thing that we never really got from the first film was any back story for the characters, unlike most other Pixar films, for example the amazing opening of Up and the equally tragic opening of Finding Nemo. Instead we are simply thrust into the world of Monstropolis with Mike blowing an air horn straight into Sulley’s face. I might be the only person who really cares about all this, but I’m seriously considering freezing myself until June the 21st 2013 so I don’t have to wait one and a half years pondering about what happened when my two favourite characters met at university.

Sadly, the only glimpse of the film we’ve seen so far is this very lazy logo;

I’m sure things will improve though; they’ve got to improve, SURELY!

Posted by Matthew Thompson at 10:11