As I’d spent a lot of money and travelled many miles to see one of the first screenings of Submarine, I was incredibly nervous about not actually enjoying it.

Everything the director, Richard Ayoade, has done so far has been pretty brilliant, he’s arguably the best thing about The IT crowd, the music videos he directed for Kasabian make people think their songs are a lot better than they actually are and his hair is amazingly curly. So I had a lot of faith in his directorial debut to battle the nerves out of me.

After watching the trailer, my main worry was that the film was going to try too hard to be the UK’s answer to (500) Days of Summer, which, let’s be honest, nobody really wants. The film is primarily a story about a socially awkward boy trying to deal with his embarrassing parents and simultaneously win the heart of his school crush, so you can probably see why I was concerned that each shot was going to scream out ‘I’M SO KOOKY’ like all Zooey Deschanel films do. Luckily, the only time the film ever felt like it was trying too hard to be really kooky was during a overlong montage where the lead characters dicked around with fireworks, rode bikes and sat in a bath that someone had fly tipped next to some rail tracks, but somehow managed to keep it in pristine condition. 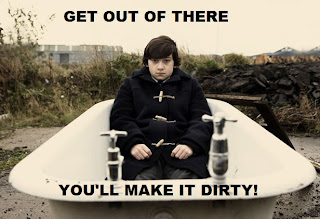 Apart from this, the film was brilliant. Craig Roberts played the film’s narrator and main character, Oliver Tate, and to be completely honest, Oliver is a bit of a prick, he makes fun of fat girls and treats his parents like crap, so if it wasn’t for Roberts’ sweet welsh voice and his very believable down played acting, I’m sure audiences would start throwing rotten fruit whenever he came on screen. In fact, I rooted for Oliver all the way through the film, like any coming-of-age film, it’s very easy to find something that you can relate to, but for me, and I’m sure many others, there was so many emotions that I remember feeling and things that I remember doing throughout the film, such as burning my leg hairs, that it made the film feel a lot more real, which probably means that I was a bit of a prick when I was younger too.

Jordana, played by Yasmin Paige, is the object of Oliver’s affections, and she’s a very closed book throughout the majority of the film, but it’s the way that Paige casts sneaky looks or faint smirks towards Oliver’s direction that you know there’s something she’s hiding, and in a vital scene where the emotion finally begins to flow, it’s incredibly moving, too moving to make jokes about even.

However, it really is Ayoade’s direction that is at the core of the films enjoyment factor, even when Oliver is pushing a girl into a pond, Ayoade still manages to make the audience care for the lead character, with the use of slow motion shots of his shocked face, to show that he regrets the moment as its happening. The film zips along at tremendous speed but it never feels messy, all motivations of characters are explained and as the credits started to ascend from the bottom of the screen, even though the ending is fairly open ended, it’s still a perfect and satisfying moment to end the story. So if this glowing praise isn’t enough to persuade you to go and see it, surely the fact that you get to see a very fat girl fall into a pond in action reply style slow motion will help you scuttle along to the cinema when the film opens in a couple of weeks.

Okay, I tried but I can’t get through this review without mentioning the soundtrack by Alex ‘I’m so northern’ Turner, from that Arctic Monkey’s band. I really didn’t enjoy it, sure it sort of fit the feel of the film, but it also felt very lacklustre and one dimensional. There was also a moment where Oliver started to play a tape that his dad had given him to help him cheer up, I thought we were going to hear some uplifting rock and roll song from the 70’s, but no, we got Mr Turner singing about things that had no relevance at all. Which is such a shame.

I don’t want to leave this review on a bad note, as I enjoyed the film so damn much, so here’s a picture of Paddy Considine’s hilarious character expressing my opinion of the film. He plays a weird medium type guy, obv.

Posted by Matthew Thompson at 10:57