So last night I went to this;

A screening of ‘IT Crowd’ actor, Richard Ayoade’s directorial debut, Submarine, a whole two weeks before it’s going to hit the cinemas, which made me feel quite professional despite the fact anyone could get a ticket to see it. The night was put on by fellow blogger, Ultra Culture, who won some Sky movies blog of the year award, or something poncey like that.

Just so I can avoid having to think of more things to blog about, I’m going to split up the whole experience into two posts. This post, to explain the fun and frolics of the night and another, where I’ll actually review the film.

So, the event was held in London’s ICA building, which has a spotless white foyer, filled with;

As we waited for the doors of the screen to open, Pringles, wine gums, cookies and cans of Coke were given out by many people I recognise and constantly bug on Twitter, it was all very surreal.

Speaking of Twitter, I seemed to be the only one who constantly raped the #ultraculturecinema hash tag. 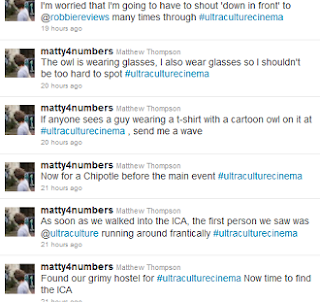 The screen doors opened and we took our seats, we were treated to more FREE STUFF in the form of a zine about the film, which, in its self was rather LOL worthy. See this picture to see what my left hand thought of the zine. 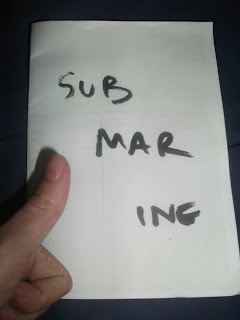 Charlie ‘Ultra Culture’ Lyne introduced the night by telling us that there’d be some fun and games involving balloons and FREE STUFF before the film began, and I’m pretty sure you now already know my opinion on FREE STUFF! 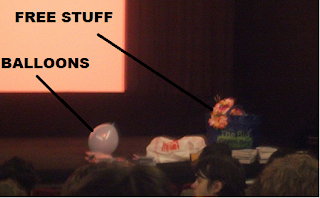 Two boys and two girls were called up on stage and coupled off. First of all, the boys had to do three humiliating challenges to try and impress their partners, which made them look like quite the fools, and then there was three challenges for the girls, all of which involved them standing there looking quite awkward. This was all judged by the two stars of Submarine (Craig Roberts and Yasmin Paige) and the hippy looking writer of the original novel (Joe Dunthorne,) who all came across as very lovely indeed. They picked two winners who received some FREE STUFF. 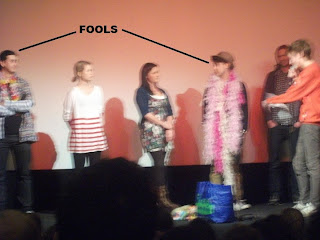 Then there were some more crazy antics, such as a hilarious introductory video showing the public of London’s lack of knowledge of the country of Wales. The film is set in Wales so this wasn’t completely unrelated.

The film then started. I’m not going to say anything about it at the moment, in hope you love this post so much that you come back and check out my review.

After the film, the audience created a stampede in the direction of the ICA bar so they could receive a FREE POSTER and get loaded up on booze while spouting out their opinions about what they’d just witnessed. As I am a poor, poor student, I had to fill my time with other endeavours, such as browsing the horror section in the Piccadilly Circus HMV that stays open until midnight, MIDNIGHT! While doing this, I found this gem; 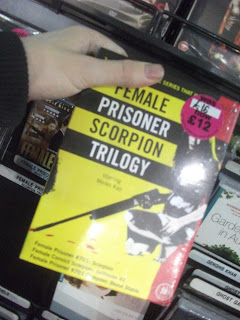 Me and my friend thought the next best thing to do was to rush to the Marble Arch ODEON to catch the last showing of Drive Angry 3D, even though we were completely sober and low on cash. We were held up at the ticket booth by a couple who were willing to pay fifteen quid each to see Big Mommas: Like Father, Like Son, even though they had already missed half an hour of it. I then decided it was too expensive to see a film that I was pretty sure I was going to fall asleep during. So it was all a bit of a none event, but in no means did it ruin the brilliant evening I’d already had.

Posted by Matthew Thompson at 08:29