From Douche With Love (Get it?)

After the absolute epic that was my Dr. No review last month, I was worried that I wouldn’t be able to keep up with the amazing standard I’d already set with my review of the second Bond film; From Russia With Love... but then I just thought, ‘fuck it, it’s not like many people are going to read it anyway.’

The first half of From Russia With Love has a whole load of spying, which is what you’d expect to find in spy thriller. There is spying in an airport, spying in a church like building, there is even some spying going on while Bond gets his end away in a hotel room. I half expected these jokers to pop up; 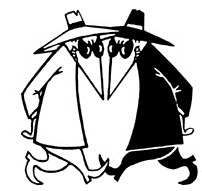 There’s quite an odd scene where a gypsy camp that Bond and his bezzie mate (Ali something) gets fucked up by a dude with a gnarly moustache and his gang. During the shoot up, Bond and his friend just seem to stand about, occasionally kicking over tables and neither of them gets seriously hurt. 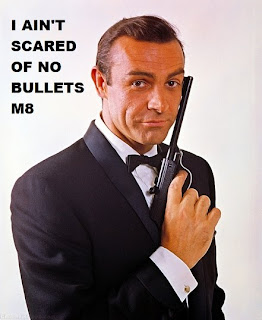 Apart from that scene, the first half is a fairly quiet affair which really helps set up the last half, where the shit really hits the fan.

It begins as Bond, and the main girl who he is shagging in this film, get on the Orient Express to London. A henchman who we were introduced to at the start of the film constantly spies (yup, more spying) on Bond, so you know he’s up to no good. The scene goes on for ages, which makes it an incredibly tense sequence, every time the shot cuts to the train rushing along, the noises that the train is making are doubled, I nearly dirtied my underwear every time this happened as I thought someone had been shot.

James Bond obviously kills the henchman in the end, because he’s James Bond. Then villains in other forms of transport try to exterminate Bond, a helicopter tries to run him over and a bazillion boats come at him, he manages to escape both by using lots of explosions.

Then other things happen and the film ends with Bond getting away with some sort of device which he’d been after for the duration of the film, which is a cause for much celebration, which in Bond terms means; shagging on a boat.

Many people consider From Russia With Love to be one of the best Bond films, while being very enjoyable it just doesn’t seem to have that spark that some of the later films contain. However, it does begin to introduce a lot of things we’ve now grown accustomed to in the universe of Bond; such as Blofeld stroking his cat and sexy girls in the title sequence, no silhouettes though, just a lot of Belly Dancing.

Sean Connery also makes an innuendo about his cock.

Stay tuned for next month for: Goldfinger (I FUCKING LOVE GOLDFINGER.)

Posted by Matthew Thompson at 06:50