Another Annoying Thing About Film

Some subtitles can completely change the original feel and story of foreign films, for example, in the bizarre Racoon filled Pom Poko, by Studio Ghibli, the English subtitles completely miss out the fact that the Racoon’s use their testicles as weapons against humans and instead they call them their ‘pouches,’ to me this is a great injustice.

Another instance is the subtitles for the French hooligan film La Haine, for some reason the people who wrote the subtitles in question decided to include words like ‘chav,’ ‘bloke’ and even ‘ras clart,’ I might be completely off the mark here, but I’m pretty certain these words are not found in the French language and are most commonly used in the east end of London, which made certain scenes that would have been quite tense, pretty funny.

Don’t get me wrong though, La Haine is still amazing. 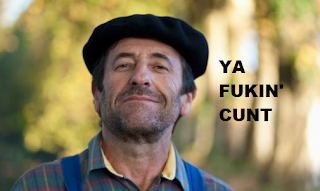 Posted by Matthew Thompson at 09:25