Balls to singing nuns, I'd rather have muscular old men

Apologies to my avid readers for the lack of posts over the last couple of days, but the stress of having to write quality material got a bit too much for me and I fell rather ill.

I’m still not back to a 100% so this post is going to be short (in contrast to my four previous epics.)

The discussion of silly stickers/promotional tools has been much discussed on other blogs and twitter, but the other day I came across this; 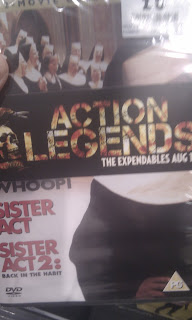 No one is going to go to HMV with the intent of buying the Sister Act double pack and see that banner thing and think ‘OMG LOOK, THE EXPENDABLES, THAT’S BEEN OUT SINCE NOVEMBER, FUCK SISTER ACT, I’M GOING TO FIND AND BUY THAT!!!’

Also, if you tell me that the banner thing has probably just been left on since no one has bought that particular DVD, go and rot in a hole, the two films are completely unrelated and dissimilar so my point is still valid (ish.)

Posted by Matthew Thompson at 10:45