Famous quiff master and BBC film critic, Mark Kermode, named the Toy Story films ‘the first perfect trilogy’ (or something like that) last year, and while I don’t disagree that those three films aren’t outstanding, as I personally think everything Pixar have produced is solid gold. I think he overlooked a certain trilogy. This trilogy;

These films are 'Sympathy for Mister Vengeance,' 'Oldboy' and 'Sympathy for Lady Vengeance' and they make up Korean director Park Chan-wook’s ‘Vengeance Trilogy,’ and they’re so exceptional that I’m finding it hard to inject any of my trademark humour into this post because all I want to do is write about how bloody good they are so after reading this you go and watch them all in one sitting.

I suppose I’m cheating, as they aren’t really a conventional trilogy because the films don’t run on from each other, but they all have the same key theme, yes that’s right, vengeance.

I’m sorry to use a common cliché here, but they are all beautifully shot, you never want to look away from the screen. Each film includes a lot of graphic violence, but it’s actually used to move the story along, and not just to feed the gore libido of blood thirsty teenagers.

They also achieve something that even Woody and Buzz can’t claim, all the plots are entirely different, each a bit more barmy than the last. Sympathy For Mr. Vengeance has a dumb mute with green hair for its lead character, Oldboy includes the eating of a live octopus and Sympathy For Lady Vengeance has a whole manner of bizarre moments that crescendos with the face palming of a cake shaped like a block of tofu. Srsly. 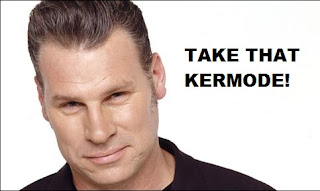 Posted by Matthew Thompson at 04:48