One for the baby book.

As I’m currently an 18 year old university student, living somewhere that isn’t London, I’ve not yet had any invites from PR companies asking me to go to screenings of their films. I’m sorry if that’s come as a big shock to you!

However, my local Picturehouse cinema recently put on an event so awesome that I actually handed over twelve pounds of my hard earned money (coughstudentloancough) to go and see it.

This event was my first ever double bill at a cinema; the two films I saw were last year’s acclaimed documentary, Best Worst Movie, about the story of early 90’s cult horror movie, Troll 2, which was then shown in all its glory.

Instead of writing a review, I could just put up these two screenshots which clearly show the direction that this post is going;

But I’m going to make you all listen to my opinion anyway.

Best Worst Movie follows the original cast and bat shit insane director of Troll 2, as they travel across America showing their film to its devoted fans, some of which had travelled hundreds of miles to watch a screening of the film in a showing room reminiscent of Fritzl’s basement. Many of the people involved with the film, which was released in 1990, kept it a secret from family and friends for as long as they could, as even they knew how terrible it was. One of these people is George Hardy, who played the father of the family that Troll 2 focuses on, the opening of the film shows Hardy living his life almost 20 years after the film was made, and he is a strong contender to beat James Stewart for the ‘Most Likeable Person Ever’ award. 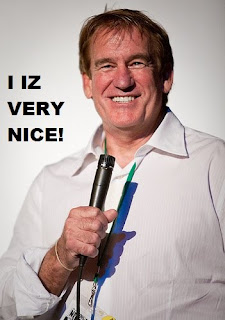 The main emphasis of the beginning of the film is that Hardy’s friends and family were all shocked that he could be involved in something this terrible, despite being such a great guy. However, as we reach the end of the documentary, after seeing tons of Troll 2 parties, people getting Troll 2 tattoos, and countless sold out screenings, it’s evident that it isn’t as bad as everyone first thought. The fact that the film never got a proper release, was made on peanuts and is unintentionally hilarious hasn’t stopped people across the globe getting their hands on it and loving it like their deformed little brother. If this was a fable by Aesop, the moral would be that people can always find good qualities in anything, just like Friday by Rebecca Black is so damn catchy. I made a popular culture reference, check me out! The fact that Best Worst Movie is pretty damn great is also another example of Troll 2 adding to its legacy.

It did go on a bit though, and I’m not too sure how many shots of fat horror fans screaming nonsense one film can take, but it’s great fun and has a strong message that isn’t constantly pointed out to you like other documentaries.

As I expected, Troll 2 was hideously bad film making, but it contained scenes of people turning into trees, a small boy pissing on some cakes and a woman exploding into popcorn, which all had the room in a bout of giggles, so, to reiterate what Best Worst Movie was getting at, it wasn’t all bad.

Posted by Matthew Thompson at 04:57