It’s quite a sad state of affairs when my first blog post in over a week is about an actor passing away, it’s also very sad that the actor in name was pretty great.

I may seem like quite an uninformed person to be writing this post, as I’ve only seen five of Michael Gough’s films, the last being 2010’s god awful Tim Burton self indulgence wank fest Alice In Wonderland, the other four being (as you might have guessed) the four Batman films of the 80’s/90’s where Gough plays Bruce Wayne’s loyal butler, Alfred. Before you start to cry out ‘Mr Douche, Batman Forever and Batman & Robin are also terrible films’ please read on.

One faithful day last year when I found myself with bugger all to do apart from vegetate in front of my TV, I decided to watch all four of these Batman films back to back, and as the quality began to quickly diminish there was one thing that stayed constantly amazing, this is of course was Gough’s acting.

He managed to stay true to the original deadpan nature of Alfred from the Batman comics that were made decades earlier, while still carrying an instantly likeable charm which makes him quite high up on the ‘actors who I wish were my Granddad’ list. He managed to deliver a lot of brilliant one liners that evoked actual laughs, not just embarrassed giggles that the awfulness of Mr Freezes’ puns produced.

In the latter films, he was the only character I actually cared about, and not just because he was the only protagonist not wearing the infamous nipple plates, but also because he was the only character who had any real depth. Batman & Robin is constantly voted ‘The Worst Film of All Time,’ and it is pretty dire, but the fact that Gough managed to draw out an emotional response, despite being surrounded by turd, is a pretty amazing achievement. My hat really goes off to the man and I hope he’s fondly remembered. 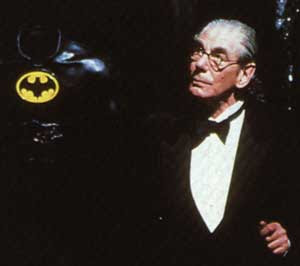 Posted by Matthew Thompson at 10:48